The house that garbage built in York Region – rental mayhem 101 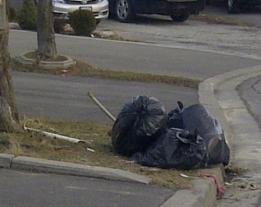 What comment can I offer on the lack of care for rental homes in York Region? What’s sad is home owners who buy rental properties, in fairly nice neighbourhoods, are turning them into rental ghettos. It’s said to see how individuals can come into a area and treat it with no care. Now there are some basic considerations to home ownership, but one that seems to allude G.T.A residents is the basic decency to keep their neighbourhood clean. Why do you put out garbage and leave it on the curb for a week; knowing it won’t be picked up until next week? Now I know what you are thinking. Maybe they are on vacation right? Wrong! I have seen this time and time again. Homes that are rented out and garbage left on the street; including glass, paint cans, and other items. Unfortunately with an interest rate hovering at the lowest in many years this problem can only get worse; with investors trying to make a quick buck. What’s interesting is this type of issue rarely happens in an area like Leaside, Unionville, Whitby, Oakville, Woodbridge or other portions of the city. Why? Maybe it’s because residents care and want to ensure that their investment remains intact. There is little tolerance for individuals who buy a home and don’t maintain it. It’s sad because I am not sure if this problem will ever be fixed. We take the taxes, but forget the neighbourhood. In some areas people don’t care and I am not even sure why. Maybe they just like it that way?

Strike! Lots of confusion in York Region (YRT and VIVA)

There seems to be a lot of confusion over what is running and what is not in York Region. Details from the YRT/VIVA site are listed below, however there is much confusion over exactly which routes are not in operation. Some TTC routes, that go into Markham are still in operation.

For more details click here or here. For details on the services unaffected by the strike, please review the information below.
Note: Seems it maybe best to catch a Go Bus, Go Train or at least try the 99 bus.

What is the plan for Transit City now? GTA has worst commutes in 19-city survey

Commuters in the Greater Toronto Area suffer through longer round trips than their counterparts in 18 other major centres, including notoriously congested Los Angeles, according to a new report commissioned by the Toronto Board of Trade.

The board’s second annual “scorecard on prosperity” concluded the average GTA commute lasts a punishing 80 minutes for drivers and public-transit riders alike, putting the region an “embarrassing” last place behind not only L.A., but also the gridlocked metropolises of New York, London and Montreal.

“The report shows [commute times in the GTA] are getting worse,” said Carol Wilding, the president of the board of trade. “So there’s another clearly strong proof point and evidence that says they’re getting worse; we’ve underinvested. We’ve got to get on with it.”

Toronto’s commute times are the longest

When you vote, you MUST prove your identity and address. You have three options:

Provide one original piece of identification issued by a government or government agency containing your photo, name and address.

Note: The above pieces of identification are examples only.

Provide two original pieces of identification authorized by the Chief Electoral Officer of Canada. Both pieces must contain your name, and one must also contain your address. Here is the list:

Note: A document bearing an address may be used as proof of the elector’s address if this address was written by the issuer of the document and is the same as or consistent with the address on the list of electors. No document other than those included on this list may be accepted to establish the name and address of an elector.

You can be vouched for by an elector whose name appears on the list of electors in the same polling division and who has an acceptable piece or pieces of identification. Both will be required to make a sworn statement. An elector cannot vouch for more than one person, and the person who has been vouched for cannot vouch for another elector.

VIVA on strike for Wednesday

Thirty-five-thousand commuters in York Region will have to find another way to work or school come Thursday morning.

That’s because Viva bus drivers will go on strike starting at 4 a.m.

Union members turned down a tentative settlement by 61 per cent, Wednesday, and that group represents 165 bus operators.

In a press release, Bob Kinnear, President of ATU Local 113, which represents the bus drivers said “we are a democratic union and our members have spoken.”

He added “Veolia management [the company that runs Viva Transit] knew that the strike would being tomorrow (Thursday) if their offer was turned down and I have informed them of the results of the vote.”

The major issues in negotiations are wages and sick time.

At this point no further talks have been scheduled.

All York Region Transit (YRT) buses will continue to run as usual because they are not part of Viva Transit.